First, I looked at Flicker Maps and thought about how I might start mapping my photos of special library art from around the country.

Then, I created a montage of book photos from Flickr. This can take a while to download/build, but it is fun. I see I could e-mail the montage or copy-and-paste the url, but not send it directly to my blog.

There is a great story that goes with the montage mashup. 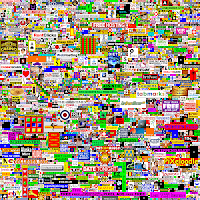 Several years ago, some young man decided to make $1 million by offering to sell each of 1 million pixels on a page for $1 each. You can image how small each would be, once you look at the Flickr montage tool... Well, some paid $1 and some bought a bunch of pixels together so their ads or pictures would be more visible. It worked great for him and their were a bunch of copy-cats immediately after that. FYI: Here is an image of that famous Million Dollar Homepage, thanks to Wikipedia.

A city or a school could do something similar as a fundraiser, but now they could also offer T-shirts, calendars, and other items with the montage on it. Also, the montage could have some parts of its "real estate" at a higher price -- So, for example, if your Montage also spelled the word "READ" or "READ SAN FRANCISCO" you could offer pixels at a higher price if they were inside the letters, and a lower price elsewhere. A company selling this kind of fundraiser exhibited at the California PTA convention.