Web 2.0 Mashups: Making the Web Your Own 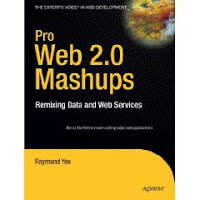 Here is a second post about a presentation at the annual summer CARL North IT workshop, "Mashup the Library."
Presenter Raymond Yee, UC Berkeley School of Information professor, teaches a course on “Mixing and Re-mixing Information.” He has also written a book on “Web 2.0 Mashups: Making the Web Your Own.” He showed us the first example of a mash-up: a mix of Craig’s List of hosing rentals and Google Maps, thus creating a powerful way to house-hunt by using housingmaps.com. Google could have squawked, but instead it released an API that formalizes how to use Google Maps for mashing.

See Ray's wiki for more on his presentation and book at Mashupthelibrary20080725.

A third example is Geotagging with Flickr.com and Google Maps greasemonkey script.
Yahoo! Pipes – visual programming. This was used to mash NYTimes.com World Section with Google Maps. There is a mini tutorial on the Yahoo! Pipes site, but it might be blocked at your worksite -- go to a library to check it out.

Zotero.com is an extension of Firefox. It does bibliographic citation. Zotero could be a mashup program because it can grab bibliographic metadata from Amazon.com
So many web 2.0 tools -- so much to learn! Enjoy.
Posted by Jackie S, 2.0 project manager at 6:58 AM