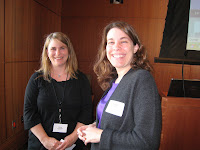 "Mashup the Library" was the theme of the annual CARL North IT Summer Workshop, which was held on June 25, 2008 in the new library on the Santa Clara University campus.
This post includes my notes from Keynote Speaker Rachel Smith, Vice President of New Media Consortium. Photo is of CARL North IT co-President Sheila Cunningham and Rachel Smith. Rachel set the stage for her presentation on new technology trends when she used a scrolling presentation by Vuvox collage rather than a traditional PowerPoint Presentation to walk the audience through her overview of the 5th annual Horizon Report. This is the time of year when NMC puts out a “call to scholarship” around topics in the Horizon Report. The technology forecast is written for higher education in general, not a specific group within academia. NOTE: August is an excellent time for academic librarians to contribute to the effort. In fact, in addition to regularly contributing to it, academic libraries should make it a point to acquire a copy of the report each year. It would be a good report for the library to promote to its faculty and add a cover commentary on how the library is using or would use new technology.

The Horizon report has three (3) horizons: 1-2 years, 3-4 years, and 5+ years. Each section focuses on two technologies. The Report represents an effort to capitalize on research done by a few people and to distribute the information to many. It is not predictive. It is a forecast.

This year, there is also a section on metatrends – trends that appeared in multiple years of the Horizon Report. An example of this is Gaming. Three years ago, Gaming was featured in the 5th year. Then, Second Life and World of Warcraft became big so Gaming became a topic called Virtual Worlds. Gaming became big but in an unanticipated way.

Here's how the technologies are selected. The Horizon Report has a 40-member International Advisory Board representing about eight countries. There are no face-to-face meetings, just a wiki. Each year, members start with all possible technologies (about 100) and then each member votes for their top 10 technologies and assigns each a horizon (1, 2, or 3). This reduces the list to 12 topics, and then each is written up. The write-up includes how the technology is or would be used in higher education. There are four topics per horizon. Next, members of EduCause and NMC are invited to give examples. One example Rachel cited was from a South Carolina private university, Abilene Christian University, which gave each student a choice of an iPhone or iPod Touch at the beginning of the Fall semester. All class content and other content were on these mobile devices. At ACU, faculty wrote a horizon report version for their own university.

What was forecast in the 2008 Horizon Report?
YR 1-2:
· Grassroots video (video clips like YouTube, which are easy to capture, edit, and share.)
· Collaboration web (i.e., NING or pageflakes)

YR 3-4:
· Mobile Broadband (like iPhone and iPod Touch). Big shift in downloading via wireless LANS. Broadband and mobile are almost everywhere. See ACU vision film. Other examples are PhoneGuide in museums and video direct to the web.
· Data Mashups – see TED video with Hans Rosling, where he debunks 3rd world myths about poverty by “mashing” statistics – combining two or more data bases to make visual representations of the information. See also annual video mashup contest at the University of Pennsylvania. It is very inventive and creative. Songs or broadcasts are mashed up with videos. See “Info Commons @ U of Penn” music video, “Weigle Info Commons”.

Build your own Horizon! There are a number of regional Horizon Reports planned, such as one from Australia. One group wants to do one specifically for K-12. NOTE: Librarians should contribute to it up front each year, add examples, and also promote and discuss it on campus. The next Horizon Report will be released in January 2009 at the ELI Conference (EDUCAUSE) in Philadelphia, PA.
Posted by Jackie S, 2.0 project manager at 9:13 PM